1– International: http://globalmay.org/ (GET INVOLVED) is the place where you can actively participate of the Mar12 planning. There is a thread started recently, dedicated to propose and favourite #slogans for the demontrations that will take place around the world:http://www.globalmay.org/component/easydiscuss/slogan-let-s-propose-and-favourite-our-slogans.html?Itemid=146

2 – Spain/International: a team of volunteers from the audiovisuals commission are editing two documentaries that would be released in Sol square on May 15th
“AWAKE”
http://nomamesfilms.blogspot.pt/2011/11/teaser-awake-global-revolution.html
“OS QUIERO, OS RESPETO, OS NECESITO” (I LOVE YOU, RESPECT YOU, NEED YOU)
http://olharesnomadas.blog.com/

3 – Spain/International: AgoraSol Radio is looking for contacts for their programme "Embracing Cultures", if you know someone overseas who will participate in the demonstrations on May 12 and 15, and they would agree to participate speaking live to the radio in Spanish, please write an email (in Spanish) to: agorasolradio@gmail.com

4 - USA: Occupy General Strike
For the first time, workers, students, immigrants, and the unemployed from over 115 U.S. cities will stand together for economic justice.
May Day Directory: http://occupywallst.org/article/may-day/ main facebook event:https://www.facebook.com/events/337068492974144/ they request help: they need Leaflets (one Page), Posters and Banners (trike promotion material) in different Languages for the First of May. Especially in French, Hindi, Spanish, Chinese, Italian, etc. please email:euromayday@euromayday.org More info: http://maydaynyc.org/ and http://www.may1.info/

5 - USA: Charlotte, NC
Converge for Justice: Occupy Wall Street, South
Break Up BOA's Business as Usual! On May 6-9 people from across the country and world will be converging in Charlotte, NC, home of Bank of America's Headquarters and their annual Shareholder meeting, to demand an end to their practices that are bankrupting our economy and wrecking our climate.
http://www.ncagainstcorporatepower.org/2012/04/join-the-99-to-break-up-the-bank-of-america-shareholders-meeting-in-charlotte/

6 – USA: Los angeles, California
May 1st Convergence Celebrationhttps://www.facebook.com/events/206902279419687/ On May 1st, the people of Los Angeles will come from four winds of the city to arrive upon Main Street. No more Wall Street, Come to Main Street. There's a revolution in town - Main St and 6th St.
MAYDAY-MOBILES! https://www.facebook.com/events/353770878002100/ On May 1st 2012, Occupy LA - in conjunction with numerous other groups across Los Angeles and YOU! - are going to converge on the city with a four-wind caravan of cars, bikes, vans, skateboards, rollerblades....

7 – Italy: 1st National meeting last sunday 22th April
This is an attempt to reorganize the movement nationally, particularly in view of the upcoming event next 12May. The meeting took place using mumble voice/chat conference. The event:https://www.facebook.com/events/262662110495702/

8- Spain: Madrid Work Groups meeting last sunday 22th April
A day proposed to gather work groups, committees and groups in the Retiro Park in order to share plans for local and global action. Below the link to the minutes of the last assembly by “MadridMayo 2012”. http://madrid.tomalaplaza.net/2012/04/20/22-de-abril-en-el-retiro-asamblea-de-coordinacion-madrid-mayo-2012-y-puesta-en-comun/ and: http://madrid.tomalaplaza.net/mayo-2012/

9 – Hungary – met this sunday 22th April in the II Council of People - Community Forum 2012. https://www.facebook.com/events/277864878968052/
The goal of this meeting was the formulation of specific claims and the negotiation of action plans. The planned demonstration in Budapest and the specific issues underlying the claims in assemblies, by a series of forums to discuss and would like to develop a way open to all interested. M.12.
Here you have REAL DEMOCRACY NOW HUNGARY's blog inspired in the Spanish "indignados" and American "Occupy" movementhttp://valodidemokraciatmost.blog.hu/2012/03/21/emberek_tanacsa

10-Croacia is ready for the action, their calling:
“We invite you to the next mass action on May-12-2012 (12.M). We call on all social movements to take precautions, but not the only platform that calls for action, or as the owner of the protest, or as a centralized organizer. Our mission is to publish this date as a day of global uprising, organization of actions may be from our group, and to support the protests of other activist groups that share our goals, because we are just one of many”.
https://www.facebook.com/pages/12M-WorldrEvolution-Croatia/269886596406354

12- Bulgary - Sofía 12May – a day of International action!
https://www.facebook.com/events/396452863707357/
Their pitch: “For more than a year, governments on all continents have been shaken by major civil unrest.
A lot of people around the world are fed up with their government leaders, either liberal or totalitarian states. On each he had enough of the crises of injustice and inequality” 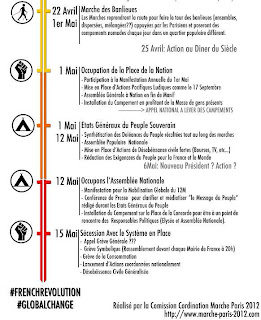 13- France – The Peoples Marches from all over the country just arrived to the Capital on April 21st:
http://www.marche-paris-2012.com/ this event marks the beginning of events scheduled during May.

If you enjoyed this newsletter please share it information among your contacts, contact email:dinamization12m15m@gmail.com
Publicado por Dinamización - 12M/15M en 22:23