1- Last Saturday 28th we held the ninth international planning meeting towards May 2012, Please find he summary of the meeting in this entry http://www.globalmay.org/blog/item/97-globalmay-international-open-space-12m15m-april-28th-2012.html

2- Building Europe: From The Netherlands to Atyhens by bike (cycling to Athens)
http://recycling2athens.punt.nl/#620005
On apr 24th after one hour looking for ann address in Linz, we finally could find a place to stay with Felix and family through couch surfing (thank you!). Very nice place and a relaxing evening. The next day, we took the bike the next day and later on in the evening under beautiful weather we found a place on the shore of the Danube.
Today afternoon arrived in Melk. Beautiful buildings. We will rest here because our knees hurt for riding against the harsh wind of bikes ..the roads are quite flat and we are also happy that all the gravel roads are over.

3- International
A calling published at the web http://www.may12.net/ dedicated to Global Actions in May12
Rise up on May 12th, 2012 - We are the 99%
On the 15th of October 2011 we took to the streets in over 1000 cities in 82 countries. We got organized and took the first steps on the road to dignity and global change. That was more than six months ago yet we continue to have to raise our voices to make politicians and bankers understand that they in no way represent us. We are united in our demands: the welfare of the 99% must be respected.
Governments only represent us if they follow the will of the vast majority, not just the privileged few. We are united, we are everywhere, we are where you least expect us.
We demand, firmly but without violence: social justice, wealth distribution and an ethic of commons. We condemn poverty, inequality, environmental devastation and corruption as tools of subjugation by the powerful on society.
We will not stop until we achieve our objectives: the 99% will take to the streets again and again until we have a say in the world in which we live. We want global change. Let's turn the streets into the world's biggest loudspeaker on the 12th of May.
Because we are the 99%, we are not owned by politicians and bankers. Take to the streets on May 12th!

4- Germany - Munich
#12m Global Change - 12.M 2012 - #edjmuenchen
https://www.facebook.com/events/274507329294063/
on May 12th. 12:00 to 13:00 _ Starting rally at Wittelsbacherplatz
demo route: Maxvorstadt -> Schwabing -> Münchner Freiheit
from 14:30-17:30: Assembly, music and action at the Munich
Freedom Global Day of Action # 12m: https://www.youtube.com/watch?v=u01ln91cMVM
They promote the declaration: democracy instead of the Fiscal Treaty from the Association for Critical Social Research http://www.demokratie-statt-fiskalpakt.org/d/democracy_instead_of_the_fiscal_treaty.pdf
5- Germany- Bochum
Occupy Bochum Demo and Assembly
Saturday, May 12, 2012_ 12:00 pm until 3:00 pm at Bochum, Husemannplatz
This Event is organized as part of the Global Evolution Day
information and discussions about the issue of international solidarity in times of crisis, fiscal treaty, speculation in food and many creative activities
https://www.facebook.com/events/407276499288505/
6 – Germany- Frankfurt
European resistance alive in Blockupy actions!!
An outline from the organization of Blockupy Frankfurt that will take place the days following May 15th with the intention of giving continuity to the protests of the Global Spring. We know it's going to be a great success!
This is the official website:
http://www.european-resistance.org/en/frontpage

7 – France - Real Democracy Now! France 12M : CHANGEMENT GLOBAL
The national event organizing the Marches and the actions in every city of France for April and May can be found in this link: https://www.facebook.com/events/351582701549430/
Coordination group: https://www.facebook.com/12M15MFRA
http://12m.indigne-e-s.net/
They have adopted the text of the GlobalMay manifesto:
http://www.globalmay.org/blog/item/95-globalmay-manifesto-template-v3.html

8 – Greece - Thessaloniki
https://www.facebook.com/events/291084777632736/
They invite every one to the world's second meeting to be held on May 12th!
Millions of people in the streets in all countries will rally for real and direct democracy. The attitude of governments is unacceptable and it's time to take matters into our own hands. We invite you to a concentration on Aristotle's Square at 18:00
9 – Greece – Agora in Athens
https://www.facebook.com/events/390837970926336/ 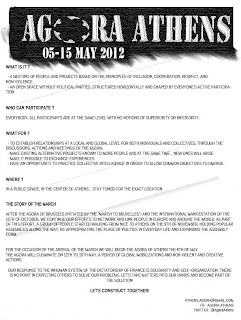 Our response to the inhuman system of financial dictatorship is solidarity and self-organization. There is no point in expecting others to solve our problems. Let's take matters into our own hands and become part of the solution!

10 – The Netherlands
RED CODE on May 1st
https://www.facebook.com/events/247704758659986/
Even if it is holiday in your country on May Day, there is something you can do to support the prpotests:
1) Enter code red alarm for our livelihoods: wear a scarf, ribbon, t-shirt or something creative that is of color red. Flags and banners may also work.
2) at 11:55 we head out to as many places as possible at work, our house in the street to make noise (to call attention).
3) perform your own idea that fits in this day of action
Are you in? Leave on this page your ideas, let us know what you will do

11 – The Netherlands - Amsterdam
DAY OF THE RE-UNIFICATION
https://www.facebook.com/events/296044297132608/
GLOBAL SPRINGTIME 12 MAY 2012 - 12:00
Whether you are a student, apprentice, cleaner, patient, manager,occupant, artist, estate agent, construction worker, teacher or care taker, an employee does not matter even if you just like good music or interested in contemporary solutions for contemporary challenges. May 12 we celebrate the day of re-unification and day debates, politics, government, political parties,associations, institutions, goals, and especially people who work together towards a responsible future.
Worldwide, attention to the injustice and inequality that manifests itself so violently. Come and show that you belong. 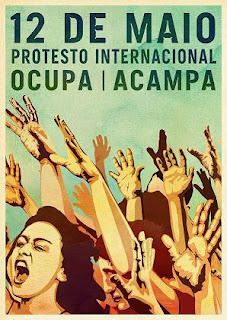 12 - Portugal – National Event
Manifestação Internacional 12 Maio - Take the street in May, with an action program to be released, joining the protest Global Spring decided to make May the month of the 2012 global day of action. Global Spring PT is composed of citizens, activists and collectives https://www.facebook.com/events/278304118921316/
Lisboa 12 de Maio - Rise Up!
On May 12th, 2012 as in 15 October! we Rise!
A day to show the governments of the World that from this day on, our Civil Society is united, and wants the world to be run by persons!
We are not commodities in the hands of Politicians and Bankers!
https://www.facebook.com/events/106111446185775/
Santarém
https://www.facebook.com/events/361011567273888/
Comibra (about to publish the event) 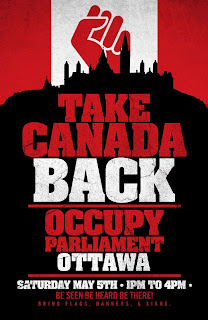 15 – Spain – Madrid
GlobalMay actions: Madrid continues updating the actions and meetings taking place in the Global May in the capital, hopefully more will keep adding
http://madrid.tomalaplaza.net/2012/04/27/acciones-del-mayo-en-madrid-actualizadas-al-25-de-abril/
You can visit the map of the thematic assemblies that will happen in Madrid during the Permanent Assemblies between 12 to 15 of May http://bit.ly/IxcKHY
16 – Spain – Barcelona
A calling for the 12 May that our comrades have kindly translated to english and are sharing it with every one who needs motivation: http://acampadabcninternacional.wordpress.com/2012/04/21/call-for-12m-from-barcelona-12m15m/

17 – Italy - Bologna
Our comrades are ready to perform a direct action at the headquarters of the Pam on Via Marconi on May. We can read his manifesto on their website. http://santainsolvenza.noblogs.org/post/2012/04/27/globalmay1st-il-primo-maggio-precario-ore-9-davanti-alla-pam-di-via-marconi/
The heading of the message goes as follows
First of May? First of all, a day when we do-not-w-o-r-k.
Simple concept, at least in appearance. Yet, in Bologna, while trade unions celebrate together happily, many companies will compel the workers and employees to work on that day like any other by blackmailing them and leveraging their insecurity and their need for income.

18 – Worldwide - creative activism for Global May: inflatables coming!
Various Occupy transnational groups working in inflatable cubes to give color and reflection to the mobilizations! On May 1st Berlin will be having 100 of them. Barcelona just prepared a tutorial that shows us how to make them!
http://reflectantes.wordpress.com/como-construir-el-reflectocubo/tutorial-reflectocubo/ 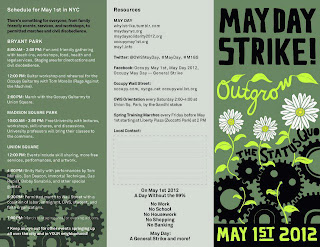 Why And How To Strike (or support those who strike) On May Day #OWS http://networkedblogs.com/wHHOM

If you enjoyed this newsletter please share it information among your contacts, subscriptions here: http://eepurl.com/klvBr or email: dinamization12m15m@gmail.com
Publicado por Dinamización - 12M/15M en 10:17