1_ International Globalmay Manifesto
After a number of meetings, the text is almost ready, it only needs us to give a read, a though, make the necessary amendments to make it fit within the context of our Assembly. For those who are in a rushm this text can be of great help!
http://acciones-12m-15m.blogspot.com.es/2012/05/may-12th-globalmay-statement.html
We already have the text translated to Portuguese tanks touour comrades from Real Democracy Now Brasiland Translator Brigades: http://acciones-12m-15m.blogspot.com.es/2012/05/12-de-maio-manifesto-globalmay.html

2_ International SLOGANS
Getting ready for the big days, we can make use of some inspiration, you can borrow slogans gathered at our proposals section. Please use them change them and spread them, they are yours http://acciones-12m-15m.blogspot.com.es/2012/05/slogans-for-may-2012.html 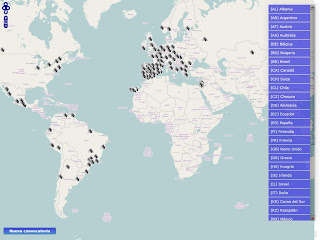 3_ International Map of actions on May 12th
We are happy to present a map: http://map.12m-15m.org/
that is being filled with events that will take place on May 12th
The version in english is almost ready, by the time being please send and email a link and the slogan of your official action to dinamization12M15M@gmail.com and we will log your event

4_New Zealand - Wellington
https://www.facebook.com/events/406615092706169/
Gladstone terrace. Wellington, New Zealand
Everyone is invited to #12M Wellington ‘Speak out’ action. A global demonstration/day has been summed to happen in this day all around the world. It is addressed to those who fight and are concerned about social justice, environmental protection, a more fair economy… All causes have a voice in here since reasons that have leaded to that share similar backgrounds. 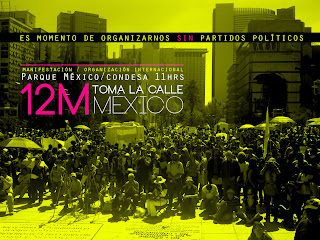 5_Mexico – Mexico City
http://on.fb.me/LCMiNT
We are invited you to participate in the round table for agreements and negotiations that will take place on May 12, 2012 in response to the international call to demonstrate peacefully against current policies.
The objective of this roundtable is to bring together different organizations,communities and teams that make up the digital and social resistance in order to recognize each other and, if possible, to develop joint work plans. More on this at the web: http://pastebin.com/evuksxQZ
Guadalajara, Hemosillo, Huajuapan de León, Sinaloa & Querétaro, also organizing actions on May 12th

6_ Spain - State meeting
The Fourth planning meeting of Spanish Assemblies towards May 12 took place on Saturday May 5th. Here you find the minutes of the meeting (in spanish): https://docs.google.com/document/d/1sqawopyNAkQk5fwhNVOpbTZ-HDy1_iQTTtYycTKaQOs/edit

8_ Brazil - Rio de Janeiro
12M! 12Méier! Ocupa Meier! Ocupa Rio!
In Rio de Janeiro, one of the initiatives was going out to the central/touristic zone of the city, and hold a meeting in the neighborhood of Meier, creating new multiplying spots for occupations throughout the city.
https://www.facebook.com/events/251193284979858/
Their latest meeting for organizing the event was on Saturday, 05.05 at 16h in the amphitheater of the square Agripino Grieco, in Meier.
Riberao Preto (Gloden riber)
We need and we will create real democracies!
Tired of crises, injustices, corruption and inequality, we face the union of governments and economic elites oppressing us.
Democratic and nonviolent protests are popping up all over the earth and at this moment hundreds of popular assemblies are being held on all continents.
https://www.facebook.com/events/111490865653796/
Curitiba - a Global Spring
https://www.facebook.com/events/448160731865183/
Global Spring Portugal-Brazil is comprised of citizens, activists, social movements that, together,peacefully, in their diversity and autonomy, want to find solutions and build new models of organization at a human scale, sustainable and more democratic.
And they do it decentralized and autonomously but converging in various parts of the country. where the calling to indignation and for change will be felt.
Salvador de Bahia - #12m Salvador
https://www.facebook.com/events/382163611835461/
Events have also been confirmed in Belém, Bauru, Brasilia, Porto Alegre, Salto de Pirapora, Salvador % Sao Paulo!!

9_USA- Worcester
M12 Day of Action and Regional Gathering, by Occupy New England
https://www.facebook.com/events/330778876980716/
The day will have four core key components to it: getting as many Occupy groups and participants in one centralized location at the same time for a day of networking and planning, direct actions and public visibility, continued actions against corporations backing ALEC, and finally the flared up "War on Women" - discussion on women's issues (rights, health care, etc...). Bring signs and banners, rep your local group too. We love to know where you came from. 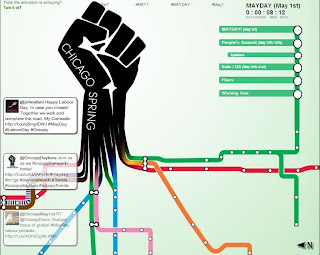 10_ USA - Chicago
People's Summit - Chicago Spring 12 - 13 MayFor more information and registration, please check out our website! Childcare will be provided! https://www.peoplessummitchicago.org
Though the People's Summit will be free to everyone it is still going to cost around $10,000+ to pull off.
With that said, we are requesting donations for those able to do so in order to finance the summit. Donation link below:
https://www.wepay.com/donations/peoples-summit
RSPV to the facebook event https://www.facebook.com/events/181301288639448/

11_ Canada - Calgary
12M15M Campaign for Global Change
https://www.facebook.com/events/277873562299752/
Our comrades are holding preparatory meetings, we are very happy to have support from that part of the globe.

12_Norway - Oslo
#M12 - Global aksjonsdag
https://www.facebook.com/events/373659959352491/
Their call goes: "We will not stop until we achieve our objectives: the 99% will take to the streets again and again until we have a say in the world in which we live. We want global change. Let's turn the streets into the world's biggest loudspeaker on the 12th of May"

14_ Germany- Hannover
12. Mai - Weltweiter Occupy-Aktionstag
https://www.facebook.com/events/269185199831454/
ESM and bank bailouts with your money
Dismantling of democracy, filters and favoritism
Policy for Maschmeyer, Ackermann and co.
Investor fraud, state bankruptcies by gamblers,
Speculation in food,
Gradual reduction of your rights as an employee
Tuition fees and education crisis
Not everything you read is pleasing!
Need to take to the streets again.
Saturday May 12, 2012
14:00 at Packhofstrasse
Please join to share and bring your friends!
Occupy the planet!
We are the 99%.
From Oakland to Auckland
From Tel Aviv to Tallahassee
Expect us!

15_ Germany - Erfurt
Global (R)Evolution Day - Enough is enough- Outraged citizens for change
https://www.facebook.com/events/416697828343526/
Our comrades call for a peaceful protest
Join us on 12 May 2012 in Erfurt on the streets!
We meet at the main train station in Erfurt at 14:00 clock.
Subjects will include:
1. Solidarity with all people (both in Europe and Worldwide)
2. Is a new monetary system possible?
3. The demand for the transaction tax
4. Demand for a BGE (unconditional basic income)
5.The implementation of the Energy Independence (decentralized energy supply)
6. Life without weapons
7. Responsible consumption
8. More democracy and citizen participation
9. STOP ACTA - against government, controlled by lobbying "repression"! 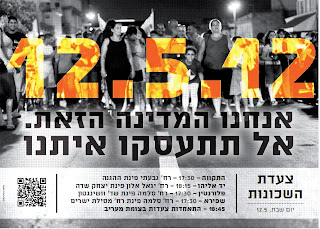 If you enjoyed this newsletter please share its information among your contacts, thanks!