BRING A TENT - Occupy London strikes back - 12 May

On 12 May, the Occupy, indignados and take the squares movements from all over the world have called for a global day of action. The day will see thousands of people from Moscow and New York to Athens and Madrid taking to the streets.
In London we'll be visiting the '1%', those who: 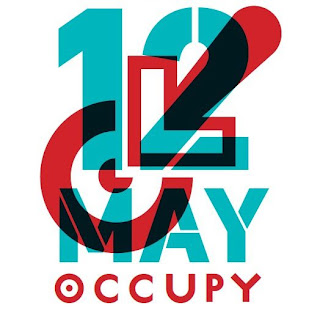 From banks and hedge funds to lobbyists and private equity firms, they're all in the 'Map of the 1%' that has been produced by Occupy London and will be available on the day.

Nowhere in Europe is the unequal distribution of wealth as striking as in the UK. The richest 1,000  persons, just 0.005% of the adult population, increased their wealth by  £155bn over the last three years. That is enough for themselves alone to pay off the entire budget deficit and still leave them with  £30bn to spare. [1]

"'We're all in this together' never rang so hollow. Whilst the rest of the country is being crippled by war-time austerity, the very same people who caused the crisis are now sitting on wealth even greater than what they had before the crash", says Laura Taylor, an Occupy London supporter.

Saturday will start with a teach-out at St. Paul's at 1pm, organised by the TentCity University, the educational arm of Occupy London. It is aiming at promoting informed political action and exploring viable economic alternatives before we pay a visit to the City institutions that caused and continue to profit by the crisis.

The day will see citizens using peaceful, creative ways to deliver their own messages to the financial and corporate elite of the City.

We will continue to exercise our right to peacefully assemble in public spaces and develop the democratic processes to address the problems we face.

*** Stay in touch ***
- Important: To receive free notifications on the day via sms text `follow @occupymay` to 86444. (Do not include the quotation marks `)

- DONATE to help make it bigger, louder and bolder than ever here:http://www.sponsume.com/project/meet-1-0